For interactome capture, RBPs are photo-cross-linked to their RNA targets. Subsequently, oligo-dT resin is used to capture polyadenylated RNAs and to co-purify with them the covalently bound proteins. RNAs that lack a ploy(A)-tail can, however, not be captured by this approach, limiting its broad application. In particular, prokaryotic organisms that do not polyadenylate their mRNAs are not amenable to interactome capture.

Now three manuscripts have been uploaded to bioRxiv by the Lilley, Krijgsveld, and Beckmann labs (we contributed to one of them). In all cases extraction with organic solvents is employed to purify cross-linked RNPs (see figure) circumventing the requirement of a poly(A)-sequence for RNP capture. Moreover, this approach also captures RBPs that bind to RNA as short as 30 nt.

The manuscripts can be found here:

Nucleic Acids Research just accepted another manuscript for publication to which we have contributed. In an experimental effort headed by our colleague Sébastien Ferreira-Cerca (University of Regensburg, Biochemistry III), the function of the atypical Rio kinases in ribosomal smal subunit (SSU) biogenesis and maturation was addressed in Archea. This revealed activation of Rio2 by an ancient and conserved mechanism involving ribosomal RNA that stimulates release of the kinase from the nascent 40S particle. Watch out for the next NAR table of contents: there you should find a link to the manuscript, once it is out!

New publication from the lab

Good news: A manuscript from the lab has just been accepted for publication in the RNA Journal!

We have identified the protein Sister-of-Sex-Lethal (Ssx) as a novel repressor of translation. Ssx is a paralog of the master regulator of female development in Drosophila, Sex-lethal (Sxl), that acts as a repressor of male-specific lethal-2 (msl-2) mRNA translation. It employs two distinct and mutually reinforcing blocks to translation that operate on the 5’ and 3’ untranslated regions (UTRs) of msl-2 mRNA, respectively. While 5’ UTR-mediated translational control involves an upstream open reading frame, 3’ UTR-mediated regulation strictly requires the co-repressor protein Upstream of N-ras (Unr) which is recruited to the transcript by Sxl.

Ssx and Sxl have a comparable RNA-binding specificity and both proteins can associate with Uracil-rich RNA regulatory elements present in msl-2 mRNA. Moreover, both repress translation when bound to the 5’ UTR of msl-2. However, Ssx is inactive in 3’ UTR-mediated regulation as it cannot engage the co-repressor protein Unr. The difference in activity maps to the first RNA-recognition motif (RRM) of Ssx. Conversion of three amino acids within this domain into their Sxl counterpart results in a gain-of-function and repression via the 3’ UTR, allowing detailed insights into the evolutionary origin of the two proteins and into the molecular requirements of an important translation regulatory pathway.

Are circular RNAs (circRNAs) translated? It is very intriguing to speculate that (at least some) circRNAs might encode functional peptides. So far however, evidence in support of this theory is weak. One might hypothesize that by non-canonical initiation once in a while a ribosome might indeed translate an open reading frame encoded by circular RNA, whether this yields significant amounts of a functional protein still remains to be demonstrated.

In a collaborative effort with the Bindereif lab at the Justus-Liebig-University of Giessen, we have analyzed the sedimentation of circRNAs in sucrose gradients.  If circRNAs are indeed translated this could be revealed by a change of sedimentation behavior after treatment with a drug that releases elongating ribosomes from RNAs (Puromycin). In our experiments however, no significant change in sedimentation behavior of selected abundant circRNPs from HeLa cells could be observed, suggesting that these circRNAs are not (or at best only weakly) translated.

CircRNAs do however associate with proteins to form ribonucleoproteins (RNPs). In our recent publication ‘CircRNA-protein complexes: IMP3 protein component defines subfamily of circRNPs’ (published in Scientific Reports) we demonstrate that in HeLa cells, circRNAs form distinct, large RNPs. Moreover, we identify the RNA-binding protein and tumor marker IMP3 (IGF2BP3) as a protein component of numerous circRNPs.

RNA Biology in Physiology and Disease – Special Issue out now! 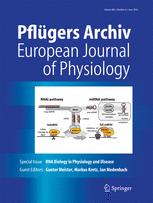 A special issue from Pflügers Archiv – European Journal of Physiology focusing on the role of RNA in physiology and disease has just been published. It features review articles – many of which are open access – that address diffenrent aspects of and the latest findings in RNA biology. So take some time and indulge yourself with some exciting reading!

Bioinformatics Course at the University of Regensburg

From October 10th to 14th 2016, a methods course on ‘Analysis of NextGen RNA-Seq data for expression profiling and protein binding RNAs‘ will take place here in Regensburg. Insightful lectures will be deliverd by reknown experts in the field, including (in alphabetical order) Simon Anders (FIMM Helsinki), Markus Hafner (NIAMS/NIH Bethesda), Steve Hoffman (University of Leipzig), Stefan Kirsch (Fraunhofer  ITEM, Regensburg), Charlotte Soneson (University of Zurich), Rainer Spang (University of Regensburg), Nicholas Strieder (University of Regensburg), and Grischa Toedt (EMBL Heidelberg). After the lectures, there will be ample time for hands-on training allowing the participants to gain some practical experience with the latest computational approaches. If you are interested in participating, please register before July 13th.

The course is generously supported by the Graduate Research Academy RNA Biology of the Collaborate Research Center SFB960 ‘Ribosome formation: principles of RNP biogenesis and control of their function’.

Soon a special issue with focus on ‘RNA biology in physiology and disease’ will be published by the European Journal of Physiology (Pflügers Archiv). Together with our colleagues Benedikt Beckmann (IRI for the Life Sciences, Humboldt University Berlin) and Alfredo Castello (University of Oxford) we have contributed a review article entitled: The expanding universe of ribonucleoproteins – of novel RNA-binding proteins and unconventional interactions.

We focus on the recent advances in the identification of novel RNA-binding proteins (RBPs) and the unexpected finding that many of the novel RBPs do not contain identifiable RNA-binding domains (RBDs), raising the question of how they interact with RNA. It is surprising that despite the many functions that have been attributed to RNA, our understanding of ribonucleoproteins (RNPs) is still mostly governed by a rather protein-centric view, leading to the idea that proteins have evolved to bind to and regulate RNA and not vice versa. However, RNPs formed by an RNA-driven interaction mechanism (‘RNA-determined RNPs’) are abundant and offer an alternative explanation for the surprising lack of ‘classical’ RBDs in many RNA-interacting proteins (which we discuss in detail in the review article).

Check out the new homepage of our consortium Systems Biology of the Unfolded Protein Response in Glioma (SUPR-G) which is generously funded by the german ministry for education and research (BMBF).

The new year has just started and already there are some great news: Andreas Horn joined the lab as a PhD student! His PhD project will focus on a novel strategy that we have recently developed which allows to map protein-RNA interaction with high resolution in a parallel fashion. Welcome to the lab!

With christmas time approaching, we would like to thank our colleagues and collaborators for a wonderful and productive year! Also we would like to specifically thank the funding agencies for their very generous support that helps us to pursue our scientific goals!

Merry Christmas, a relaxing holiday season and a happy and successful New Year!

We are very happy to announce that Stefan Reich was awarded a fellowship from the Joachim Herz Stiftung!

‘I am very happy that my application for an Add-on Fellowship for Interdisciplinary Science from the Joachim Herz Stiftung was successful. This now gives me the opportunity to attend conferences and additional courses in bioinformatics which will support our work. Personally, I hope to gain further insight into data analysis which will pave the way to success in my doctoral thesis. For this reason I want to thank the Joachim Herz Stiftung very much for the generous support and I am looking forward to the first meeting with the other fellows in March 2016.’

The Section Cellular Biochemistry and Biophysics (CBB) of the Regensburg International Graduate School of Life Sciences (RIGeL) has a new coordinator: Jan Medenbach. I am happy to take up my new duties within the graduate school and to help the PhD students wherever possible. Feel free to contact me any time by Email or phone or just visit me in my office in VKL 1 1.05!

The Collaborative Research Centre 960 (SFB960) – Ribosome formation: principles of RNP biogenesis and control of their function has been extended for another funding period! We are now part of the SFB960 and we are very grateful for the financial support by the Deutsche Forschungsgemeinschaft (DFG) that allows us to address exciting scientific questions (see project B11).

Pictured above: the principal investigators of the SFB 960

The E:med webpage has just become live! E:med aims to combine life-sciences and informatics to create systems-wide approaches to address important questions in disease. We are very grateful that our SUPR-G junior consortium was selected to become part of this great initiative!